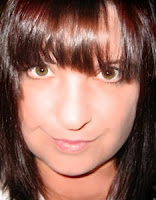 
Thank you so much for joining me today!
Thanks a bunch for having my Komal!  It’s so great to be here.

For those unfamiliar with your work, what is the I am Just Junco series about?
I Am Just Junco is an epic science fiction/dark fantasy series told from the point of view of nineteen year old assassin, Junco Coot.  Junco lives in a futuristic version of North America and the death of her father has spurred a mission to uncover secrets about her past. The first character we meet in the story is a winged alien named Tier. He wants to take Junco off Earth and no matter how hot this winged dude is, Junco is having none of it! The first book is all about Tier and Junco and how they come to terms with each other, and their interwoven futures. What do you love most about writing in the science fiction genre?
I love that anything is possible as long as you make it plausible, and I love world building.  Science fiction is all about the world and the characters and how the two interact. Junco’s world never stays the same – she’s on Earth in one book, but in space living with the winged aliens in the second.

How did you get your start in writing?
I started writing non-fiction science textbooks about five years ago and all during that time I had this science fiction story building in my head. In January 2012, I decided to make it happen and wrote the first three Junco books last year.

What are you currently reading?
Right now I’m reading an ARC for a friend of mine called SLOW: The Story of Signy and Aden.

What is your favourite science fiction novel?
Woken Furies by Richard K. Morgan. It’s a total military SF novel that most girls would never pick up in a million years, but I love the rogue soldier main character—Takeshi Kovacs—because he’s very complicated and deep.

What is your favourite part of being an author?
Meeting new people in the book world.  I have made so many new friends this past year – it’s been incredible.

Do you have any upcoming projects you are working on?
I do – Junco has two new books releasing on April 1.  RANGE is the fourth book in the series and has Junco struggling to come to terms with her destiny and The Magpie Bridge is a novella that continues the epic where RANGE leaves off—only from Tier’s point of view.

What’s one piece of advice you can give to aspiring authors?
Write every day and release something as often as you can. That’s two!  But they are related, I think.

Science or fiction?
Oh….this is actually tough for me – I have to say both! (I cheat!)

Coffee or tea?
Neither – I drink Diet Pepsi and water and that’s pretty much it. :)

To find out more about Julie Huss, please find her on the following sites.