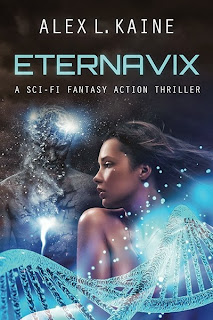 Welcome to the future. Genetic engineering has been perfected, manmade dragons fly the skies and devils are bred as weapons of war. A powerful stem-cell drug called Eternavix promises eternal youth, but ONLY if you are loyal to The Universal Imperium—the empire of empires that dominates the planet.
Eternavix can only be produced by using the DNA of women with rare, genetic traits. Mara is a Eurasian with vivid blue eyes, making her a perfect candidate for DNA extraction. She travels to war-torn Chicago with the hopes of beginning a new life, completely unaware that her body is worth a fortune to the greed mongers willing to sell her to The Imperium. Her only chance at freedom from a secret, desert prison known as “The Nursery” is an unorthodox alliance with a bio-designed devil who unexpectedly falls in love with her. Is her life worth making a deal with the devil? 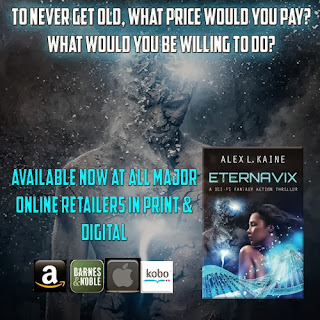 INTERVIEW with the AUTHOR

Q: Your photo makes you look a little bit demonic. Are you?

Alex Kaine: Well, my family has been known to call me the 'Prince of Darkness' but that just refers to my
attitude about the world. I have a cynical streak that surfaces on occasion. No, I'm certainly not demonic.
I'm not even evil. I mean, all of us have the potential for evil to one degree or another. But I try not to be.
I'm a good guy. I would never want to hurt anybody – unless of course somebody really pisses me off.

Q: You're smiling. But evil is a major theme in ETERNAVIX. What do you think is the nature of evil? How
do you define it?

Alex Kaine: There was a time when I didn't believe in good and evil. There were just behaviors and
consequences, actions and outcomes. And I still tend to see things that way. But over the years I've also
come to see that there really is human evil.

Alex Kaine: Evil is, at its core, insensitivity to the pain of others in the course of one's decisions and
actions. Total evil is total insensitivity. We all understand this when evil is overt. Some creep with a gun
shooting school children. Political tyrants. But there are smaller evils, of course. Manipulative mothers.
Oppressive fathers. Or vice versa. Those who take no responsibility for the pain and harm they inflict. The
exploitive types, the con men, the Ponzi schemers, who often act the opposite of what they really are.

Alex Kaine: Good is harder to define, I think. It's not the polar opposite of evil; it's not just sensitivity to
the pain of others, and the more sensitive you are the better person you are. That's not what good is. It's
more like connectedness to others. Good is concern for the whole, thoughtfulness and care that goes
beyond one's self, and actions that support all of that. But it's not martyrdom. It's not self-sacrifice or
selflessness, because your pain, your wellbeing also matters.

Q: There are a lot of evil people in ETERNAVIX.

Alex Kaine: Yes, there are. People whose actions are evil, that's the better way to put it. Harzak is evil, as is
his girlfriend, Bev, though to a lesser extent. The bounty hunters certainly are evil. The entire political and
social construct of the Universal Imperium is evil, from the top on down.

Q: And the devil in the story, Be-elzebub?

Alex Kaine: Or 'Bee' as he comes to be called.

Alex Kaine: Bee is a manmade devil who has done very evil things in the past. He inflicted extreme pain
and death and felt little or no sympathy for those he harmed. He's been part of an oppressive, exploitive
system and he loathes it, but he has not made a stand. He's the classic Nazi who is just following orders.
During the Baby Wars, some of this was excusable, because indeed he was obeying orders. Every soldier in
combat has to be evil for a time in order to achieve what we hope is the greater good. And Be-elzebub is an
excellent soldier. Trouble is, the Imperium never released him from his duties, and over many decades
Bee has slowly developed the rudiments of a conscience.

Q: Let's talk about Eternavix, the miracle stem-cell drug that arrests the aging process and allows people
to stay physically young for decades or even centuries. Do you think a drug like Eternavix is possible?

Alex Kaine: Yes, I do. Either a drug or some kind of treatment or therapy. Google is already going down
that path with research to significantly extend human life. Other corporations probably will follow. You
can see the enormous commercial possibilities, can't you? How much would you pay for something that
keeps you young and healthy for hundreds of years, or maybe forever? Will billionaires be the only ones
who can afford the price? Every widely adopted technology has social and political consequences, and it's
not hard to see a drug like Eternavix becoming a power base. Especially if it's not handled ethically. And
frankly I don't know how you would structure the ethics. I mean, who gets it? Who doesn't? By the very
fact that some get the drug and some don't, you're creating a social elite right there.

Q: Why not everyone? Why couldn't everyone take it?

Alex Kaine: You would have to eliminate children. You can't have everyone living forever and women
continuing to have babies. That would not be 'sustainable,' to use an over-used word. A powerful part of
human nature is about having kids, about reproduction, and I don't see that going away just because
people start living very long lives. Anyway, I can't imagine a world without kids. An all-adult world? That
would be awful. So I can foresee an elite that arranges things so they have it all - immortality and children
- while the vast majority of humankind lives and dies in the traditional manner.

Q: In the novel, there's more going on than just extended or eternal human life. There is also the genetic
engineering of new species, some of them quite horrible.

Alex Kaine: Right. The mastery of genetics, which I'm saying in the story occurs three or four decades
from the present, leads to the development of Eternavix, the stem-cell drug. But every technology has
branches and offshoots, and one of those for genetic engineering is the ability to create humanoids. So, in
the absence of ethics or in service to the needs of warfare, you might have manmade dragons and devils,
super-warriors, and so on. And many or all of these humanoids might be equivalent of livestock to those
who create them. Slaves for lack of a better word.

Q: A lot of unpleasant possibilities. We haven't talked yet about Mara, the main character in the story.
How did you come up with her?

Alex Kaine: When I began writing ETERNAVIX, the story started with what is now Episode Two, with Beelzebub
narrating. Mara originally was just an innocent teenager, likeable but not all that bright. She was
kind of feral, having grown up in what became a wilderness during the wars that established the
Imperium. After I finished that piece of the novel, I had a change of heart. I got to thinking and decided I
needed to tell more of Mara's story early on and that led to me making her the main character – well, she
and Bee are sort of co-lead characters. And for Mara to carry the story, she had to be interesting and
different. She still has a small trace of that feral quality, but she's smart, she has guts, she's very brave,
and she has a good sense of humor. Bad things befall her and at times there is nothing she can do about it,
but Mara is not a victim, she's a hero.

Q: Last question: will there be a sequel to ETERNAVIX?

Alex Kaine: I hope so and I hope readers demand a sequel. The world of ETERNAVIX has many as-yet
unexplored dimensions to it. 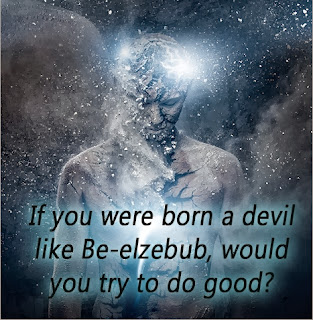 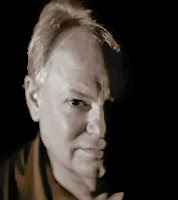 Alex Kaine is the pen name of a writer and author whose
books in a different category have sold in the tens of millions
worldwide. He is an eclectic reader and a lover of all writing
well written no matter the genre. He has been an independent,
self-supporting, paying-the-bills, full-time author for … well,
let's just say for many years. ETERNAVIX is his first sci-fi
thriller.
Alex has a unique perspective on the issue of “selective
wellness” that affects the world as a whole. He enjoys
discussions on genetic engineering as well as other high tech
sci-fi realities in life today.
Posted by Erica Cope at 6:04 AM