Review for Impossible by Komal Lewis

I want to start off this review with some honesty - when people pick up indie author's, they tend to be hesitant. What am I going to get out of this? Can this person really write a "good" story? What if I don't like it? All these thoughts are normal. However, Komal Lewis's debut novel will leave you with these answers: I got an awesome, well-rounded story. She can really write and leave me wanting more. I loved it! 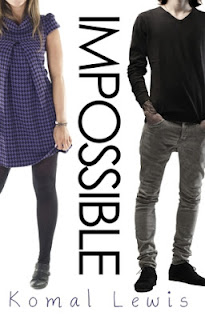 With that being said my review for Impossible.

Ashton Summers is on her way to becoming the most popular girl in school and nothing—or no one—is going to stand in her way. Especially not Luca Byron, her freak neighbor, with his tattoos, loud music, and distracting green eyes.

Luca Byron has three goals in life: get through high school with a low profile, make sure his garage band becomes something more than a hobby, and try to forget about his insufferable ex-best friend, Ashton, who he can’t get out of his mind.

The last thing Ashton and Luca want to do is rekindle their friendship, but when Ashton takes a tumble down the social ladder, Luca—with his new makeover—is the only one who can help her rise up again by pretending to be her boyfriend. At first, being together is unbearable and annoying, but things start to change as Ashton and Luca discover the real reasons they drifted apart seven years ago.

Now, keeping their hands off each other seems impossible

I got to read the book prior to everyone else (Yes, I'm bragging).

I found myself thinking about the story when I couldn't be reading it. I found myself rushing through things so I could get to the book. I had to know what was going to happen. I also had some fantasies about Luca. If you're looking for another crush, look no further.

Ashton - is dying to be the most popular girl. She feels it will cover up some of her insecurities and she's about to get everything she wanted. The cost? Anyone who stands in her way. Even if it means she has to be a complete b@tch.

Luca - is the rocker boy from next store who used to be Ashton's best friend and he has to watch the terrible things she does. It bugs him, but for seven years, they haven't talked. What can he do? I mean, he's the school's freak - abeit a hot one.

But due to the evil Kance - Ashton finds herself relying on Luca with the intention of dropping him as soon as she gets back on the social ladder. One draw back - things start happening - like super intense kissing moments and unwanted (so they think) feelings. (Komal knows how to write a kissing scene.)

I will tell you this - you will not put it down! At all. Ever. It's that good.
Posted by Michelle Flick at 8:00 AM