I'm so excited to share the cover of Runaway Mortal with A Dash of YA today! Eden from Eden Crane Design took everything I said and made me the perfect cover. And Eden's mum, Julia Crane, picked the model for the cover! So exciting! 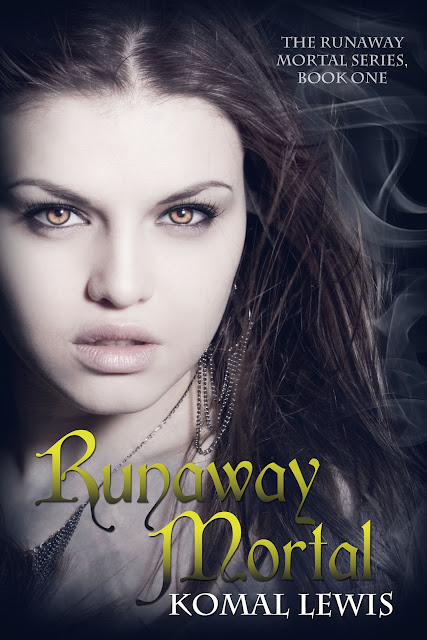 Seventeen-year-old Katerina Lyrille is one of several mortals given the privilege to attend Esteré Academy alongside powerful angels and demons. Big stress on the “privileged”, because most of the supernatural beings look down in disgust at mortals like Katerina and want nothing to do with them.

When the Headmistress of the school—a powerful angel—is found dead, Katerina is accused of her murder. Desperate to prove her innocence, Katerina runs away to seek the help of a seer who can tell her the true killer’s name, but the information comes at a price. Katerina must find an all-powerful, mythical Triad object for the seer, and in order to do so she must return to the very place she ran away from: Esteré Academy.

Now, back at school, Katerina not only has to keep her promise to the seer and find the mysterious object, she also has to deal with the arrogant, yet sexy, supernatural agent hired to guard her until her trial for the Headmistress’s murder.

The closer Katerina gets to finding the answers, the more danger she puts herself in because someone is out to stop her at all costs.

Even if it means her death.

Thank you so much to Eden for her wonderful work! The cover is even more than I hoped for!

Also, the blurb might be a little different once I publish the book, so I will update it and re-post it before the release.

If you would like to add Runaway Mortal to you Goodreads, you can do so here.