Haunted by demon whisperers, Anna does whatever she can to survive, even if it means embracing her dark side and earning an unwanted reputation as her school’s party girl. Her life has never looked more bleak. And all the while there’s Kaidan Rowe, son of the Duke of Lust, plaguing her heart and mind.

When an unexpected lost message from the angels surfaces, Anna finds herself traveling the globe with Kopano, son of Wrath, in an attempt to gain support of fellow Nephilim and give them hope for the first time. It soon becomes clear that whatever freedoms Anna and the rest of the Neph are hoping to win will not be gained without a fight. Until then, Anna and Kaidan must put aside the issues between them, overcome the steamiest of temptations yet, and face the ultimate question: is loving someone worth risking their life?

As some of you may know- I am a huge Wendy Higgins fan. Like terribly huge. Like counted down the release of Sweet Peril after I read Sweet Evil, the first day it came out. So if you haven't read Sweet Evil, go get on it. Seriously - you're going to meet the lusty Kaiden Rowe and love him.

On to my review! 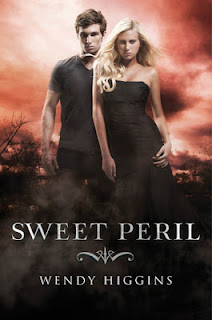 The novel picks up about 6 months after the first. Anna has half-heartedly embraced the substance abuse side of her. She has changed her reputation around from the sweet innocent of her high school to the full-fledged party girl, but after each party she wakes up the next morning scared to death she has ruined someone's life. The innocent that allows her to hold on to the hilt remains.

Her dad, plays a bigger role in this novel, as the big gruff dad, but ultimately he's a great dad - Yeah - OK so he has a substance abuse problem. Her father sets Anna to go on, what I will call, missions. She travels the world completing her missions and working toward the ultimate goal and I mean ultimate.

My gripe with this book: Kaiden is missing. I mean he appears for a few pages and then is gone.  I got frustrated because he's it for me. I want to see him be redeemed. I need to see his "colors" for Anna. But don't worry - half-way through Wendy comes through for me and delivers. Thank you Wendy!

On a side note - I'm getting married in 113 days and my last name is going to be Rowe. I actually loved Kaiden so much - I tried to convince my fiance to put that name into our baby pool of names. He didn't go for it - but I haven't given up yet!

What did you think of it?
Posted by Michelle Flick at 4:32 AM